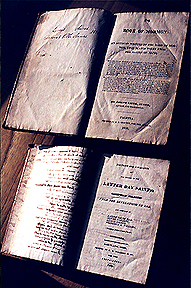 TREASURES PAST
Some Highlights Sold

SUNSTONE OF THE NAUVOO TEMPLE

White limestone, 4 1/3 X 6 feet. The better of two examples known to exist, illustrated in many books and articles. Sold to the Smithsonian Institution, now on display atop a pedestal near the original Star Spangled Banner.

The original bail bond signed by Joseph and Hyrum Smith, John Taylor and others on June 25, 1844, in a last-ditch effort to stay out of the Carthage Jail, where they feared they would be lynched.

The Justice of the Peace, unfortunately, was also captain of the local anti-Mormon militia, and he contrived to leave certain charges off this paper, giving him an excuse to re-arrest the men an hour later. Two days following, the judge's own soldiers stood by as Joseph and Hyrum were shot to death in their cell. Sold with accompanying original documents to a private collector.

Emma Smith's detailed inventory of the personal possessions of her slain husband, 1844, including his "cloth[e]s on when murdered." Signed, with the text in the hand of William Clayton and others. Sold to a private collector.

Both volumes (1856, 1877) in original full-morocco leather; the first a presentation binding, the second from the library of Mormon poet John Lyon, with his original verses hand-written on two endleaves celebrating the fact that this copy was given to him by Eliza Snow herself . . .

This book, the authoress, bestowed on me
Shows all her worth, and love of truth devine [sic]
Here are enclosed bright thoughts - read and you'll see
Her spirits form in every word, and line . . .

In beautiful condition. Sold to a private collector.

LORENZO SNOW INTRODUCES HIS DAUGHTER TO HER GRANDMOTHER

The letter of introduction sent with his daughter, Mrs. Eliza Dunford, to meet her grandmother back in Ohio in 1869. ". . . you gave me your daughter," Lorenzo wrote gratefully to his mother-in-law, "she has been all I expected . . . God will bless you and you shall come forth in the morning of the resurrection . . ."

One page, entirely written and signed by Lorenzo Snow in ink. Now preserved by the Church of Jesus Christ of Latter-day Saints. Many years later, I found a carte-de-visite photograph of Mrs. Dunford holding her daughter with a doll, identified on the back in the handwriting of her aunt, Eliza R. Snow.

Click here or on the picture at left to view a larger image.

Click here or on the picture at left to view a larger image.

SKETCH OF THE EXPERIENCE OF SOLOMON CHAMBERLIN

The only known copy of the pamphlet which moved Hyrum Smith to tears, and so impressed the Smith and Whitmer Families that they gave Chamberlin early sheets of the Book of Mormon at Grandin's printing shop to take on what may have been the first mission for the Church and the first "Mormon" contact with Brigham Young.

Printed at Lyons, New York, in 1829, this account of spiritual experiences paralleling those of Lehi and early Latter-day Saints was long known to have existed, but only turned up in 1989 when it was sent to me in a pile of Shaker pamphlets! It is now preserved in the vault of the Brigham Young University library.

Brenchley's own set of this famous two-volume description of early Utah Mormons, with his manuscript corrections and additions which appeared in the first English edition the following year. Sold to a famous bookseller for his personal collection. The bookseller was later murdered.

CIRCULAR, TO THE WHOLE CHURCH OF JESUS CHRIST OF LATTER DAY SAINTS

The first printing of news that the entire Church will go West, published at Nauvoo in October, 1845.  A spectacular Mormon broadside (Flake 1339; Crawley 284; Byrd 945), of which only five examples are recorded. This sixth example appears to be the only copy in private hands.

Our houses, our farms, this Temple and all we leave will be a monument to those who may visit the place of our industry, diligence and virtue. . . .  Wake up, wake up dear brethren . . . to the present glorious emergency . . . The exodus of the . . . only true Israel from these U. S. to a far distant region of the West . . .  Let all wagons that are hereafter built be constructed to the track of five feet width from centre to centre. . . . There are said to be many good locations for settlements on the Pacific, especially at Vancouver's Island, near the mouth of Columbia.  BRIGHAM YOUNG, Pres't.  WILLARD RICHARDS, Clerk.

The Huntington Family copy, with notarized provenance. Sold to a private collector.

Six and a half pages, signed December 15, 1859. Brigham describes his horror at the thought of the Mountain Meadows Massacre of 1857, and denies having had prior knowledge that the slaughter might take place.

. . . had I been apprized . . . , I should have used such efforts for its prevention as the time, distance, and my influences and facilities would have permitted. . . . the recurring thought of it ever causes a shudder to my feelings . . . the facts . . . are so shocking and crucifying to my feelings, that I have not suffered myself to hear any more about them than the circumstances of conversation compelled.

Sold to a private collector.

Picture at the top of this page: First editions of the Book of Mormon and Doctrine and Covenants in particularly nice condition, owned by the same family since the 1830s. The Doctrine and Covenants' flyleaves were filled with manuscript hymns by an early Kirtland resident who travelled to Missouri. Sold to private collectors of one family, 2001.