21¾ cm. 32 pp. Original green clay-based printed wrappers; ads on both sides of the back wrapper. Nearly fine; a nice copy. 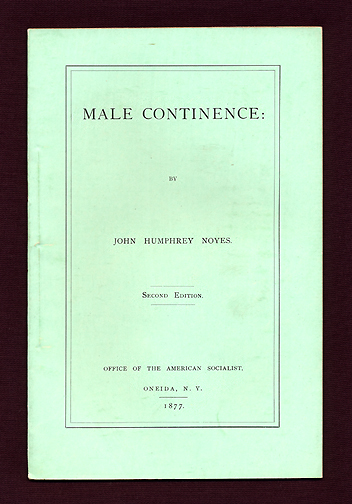 NOT IN FLAKE, but with a brief comparison of Mormon sexual creativity to that of the Oneida Community, as described by T. W. Higginson "in the Woman's Journal." The quoted selection in question appears on page 26 . . .

I am bound to say as an honest reporter, that I looked in vain for the visible signs of either the suffering or the sin. The [Oneida] Community makes an impression utterly unlike that left by the pallid joylessness of the Shakers, or the stupid sensualism which impressed me in the few Mormon households I have seen. I saw some uninteresting faces, and some with that look of burnt-out fire of which every radical assembly shows specimens, but I did not see a face that I should call coarse, and there were very few that I should call joyless. The fact that the children of the Community hardly ever wish to leave it; that the young men whom they send to Yale College, and the young women whom they send for musical instruction to New York, always return eagerly and devote their lives to the Community,—this proves a good deal. There is no coercion to keep them, as in Mormonism, and there are no monastic vows, as in the Roman Catholic Church. This invariable return, therefore, shows that there is happiness to be found in the Community, and that it is of a kind which wins the respect of the young and generous. A body must have great confidence in itself when it thus voluntarily sends its sheep into the midst of the world's wolves, and fearlessly expects their return.

First published in 1872, this second-edition pamphlet describes Noye's contrivance to limit not only procreation, but the actual loss of seminal fluid - thought by social contrivers of that period to be as deleterious to the male constitution as the loss of blood . . .

Suppose, then, that a man, in lawful intercourse with woman, choosing for good reasons not to beget a child or to disable himself, should stop at the primary stage and content himself with simple presence continued as long as agreeable? Would there be any harm? . . . Suppose the man chooses for good reasons, as before, to enjoy not only the simple presence, but also the reciprocal motion, and yet to stop short of the final crisis. Again I ask, would there be any harm? [p. 9]

And you thought they only made silverware! The Oneida Community's more free-ranging practices were curbed in the 1870s when our local Syracuse Protestant ministers took the bull by the horns. Now I hear that the silverware factory has closed as well. All good things - despite Noyes' high aspirations - must come to an end.