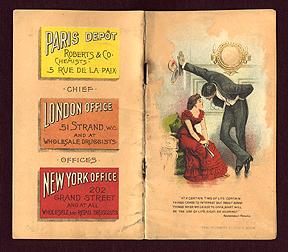 14.3 cm. [32 pp.] Original salmon colored wrappers illustrated in color. Some discoloration and wear from one of the two staples, several short tears without loss of paper or text.

NOT IN FLAKE; compare to Flake 5522e. The version at hand (though complete) has no title page nor any note stating "Confidential circular." Flake describes two different pamphlets, and two different sets of trade cards advertising this product. In each instance, only one example is located, preserved either at Brigham Young University or at the Church historical library in Salt Lake City. The version shown here has waited quietly in my safe for a number of years; I have never offered it before.

The image of the man and woman on the front cover was a stock trade card/advertising image seen on occasional other, unrelated material of the time. The colored ads on the back suggest a grand scheme with "Chief Offices" in Paris, London, and the New York distributor at 202 Grand Street.

On the front wrapper:

"At a certain time of life certain things cease to interest but about some: things [sic] when we cease to care, what will be the use of life, sight, or hearing?" Roundabout Papers. [and in faint blue letters at the bottom of the wrapper:]  The Mormon Elder's Book

ONCE, maybe twice in a career, a Mormon bookseller may come upon one of the brochures advertising this product. I had one other - quite different - perhaps fifteen years ago or more, and have located two examples of the original "tin" or small flat metal box in which this pre-, pre- Viagra product was dispensed - printed with the image of a naked Victorian lady discretely veiled here & there (mostly there) with a thin swirl of gauze. Who better, after all, to represent victory over (ahem !) "nervous debility" than the Mormon elder, with his many wives!

Always guaranteed to win a chuckle, these ultra-rare (really, really rare, not eBay "rare" !) pamphlets are practically a collector's once-in-a-lifetime score, not to be expected a second time. And speaking of scoring, just think how excited husband and wife will feel on the day when this marvelous panacea arrives in the mail . . . 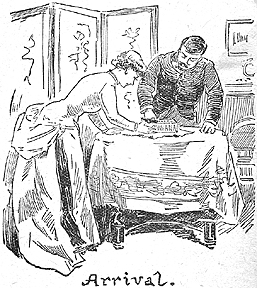 The entire pamphlet, in fact, tends to emphasize conjugal bliss, with several line-drawing illustrations suggesting that the Mormon Elder's Damiana Wafers will result in the hoped-for child, and in domestic joy. And for the man of a certain age contemplating marriage, what could be more salvific than new gas for the engine? Mr. "M.," we read on pages [16-17],

aged 55 years, had been a widower five years. Six months ago he became enamored of a young woman, proposed marriage and was accepted, and the day fixed for the wedding. Some weeks since [i.e., ago] he came to me in great distress, stating that he had been under treatment for inertia of the genital organs, but without benefit. He stated that he had for more than three years been conscious of a loss of virility, and in view of his approaching marriage to a young woman, was most anxious to restore the animal passions and powers.

"I recommended the use of Damiana in doses repeated very four hours. (I will here state that the wedding was postponed for three weeks.) After the use of the medicine for some two and one half weeks, he reported that he was in condition to consummate the marriage act. He was duly married, and is now on his wedding tour."

And what a perfect honeymoon it must have been, for it becomes evident upon further reading that this product is also an infallible remedy for Malaria, flatulency, and all those pesky Victorian complaints we don't know about today, like "Nervous Dyspepsia." And 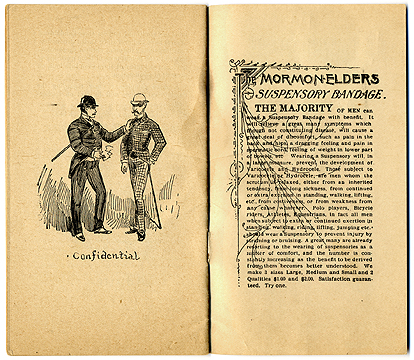 true to their name, as luck would have it, the Mormon Elder's Damiana Wafers are even "an antidote for TOBACCO and STIMULANTS: and hence, while the patient is taking the WAFERS, he should abstain as far as possible from tobacco and vinous and malt liquors of all kinds, as these are antagonistic to Damiana." (p. [22]). No kidding.

WHITE WAFERS are offered for the ladies, and on the inside back wrapper, the Mormon Elder's jock strap. Yep - that's not what they call it, but when you read the ad for "The Mormon Elders Suspensory Bandage," you will agree that it is nothing else.